WHAT IS THE PROBLEM? 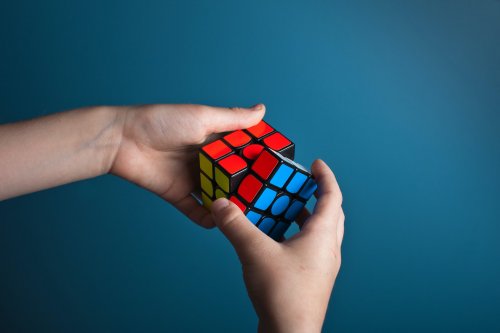 Picture a five-year-old boy, a piece of chocolate cake that he just finished gobbling down, and a gleaming rocket ship displayed in an oversized cardboard book lying open on the dining room table. What do they all have in common? Answer: each one poses a problem.

Start with the cake. You have to assemble the ingredients, mix them up in the right order, and bake the concoction long enough so that it is done all the way through but not too dry. You might end up with lopsided mess the first few tries, but you get the hang of it with a little practice.

Now for the rocket ship: engineers have to figure out how to launch it into space, keep it there, and, if it is carrying astronauts, guide it safely back to Earth. Also a problem, but more daunting than baking a cake.

And finally there is the little boy. Aside from the joy he inspires in his many wonderful moments, he presents you with so many challenges that your mind shuts down in merely contemplating the effort required to master them: teaching him to read and tie his shoes, introducing him to table manners, getting him to bed at night and up in time for pre-school, then grade school and high school, impressing upon him the awesome responsibility of driving a car and dating a girl. And on and on. There is no recipe or project plan that articulates every step in raising this little boy. His parents follow their instincts, learn from each other, read a few books on child-rearing, make lots of mistakes, and with luck produce a well-adjusted adult. Not easy!

Researchers in a field called Complexity Science have a helpful way of categorizing these problems: simple, complicated, and complex. Atul Guwande, discussing their findings in his book The Checklist Manifesto: How to Get Things Right, shows that, in activities ranging from surgery and aviation to architecture and management, one of the most important first steps in tackling a problem is to define it. You have to make sure you are thinking about it in the right way. Using a recipe to bake a cake – a simple problem — is a good idea, but in raising that little boy it would be a recipe for disaster. Every child is unique — children are complex. Engineering problems fall somewhere in between simple and complex. They are complicated, requiring lots of steps, but ultimately manageable with the appropriate discipline.

Einstein famously said if he had an hour to save the world he would spend fifty-five minutes defining the problem and five minutes solving it. This is good advice for problem-solvers of all sorts: parents, engineers, and managers. Framing a problem incorrectly usually leads to big mistakes and a whole lot of frustration.

Take Google’s philanthropy arm, Google.org. Larry Page, Google’s co-founder, announced when it was formed in 2004: “We hope someday this institution may eclipse Google itself in terms of overall world impact by ambitiously applying innovation and significant resources to the largest of the world problems.” Problems like disease, hunger, and encouraging the growth of small businesses. Years later, Google.org is still doing good work but has narrowed its ambitions. One expert observed of the organization’s brilliant, engineering-oriented staff: “I think they expected there would be the same kind of ‘launch early and often’ approach demanded on the business side, but that’s not the way development works.” In other words, development is a complex rather than a complicated problem. It is not an engineering problem.

The next time you have to solve a problem, start by asking how to define it. You will save yourself lots of time and irritation if you slow down long enough to reach a thoughtful answer. As the great American engineer and inventor Charles Kettering put it: “A problem well stated is a problem half-solved.”