THE PROBLEM WITH THE ADMINISTRATION'S ADMIRATION FOR AYN RAND 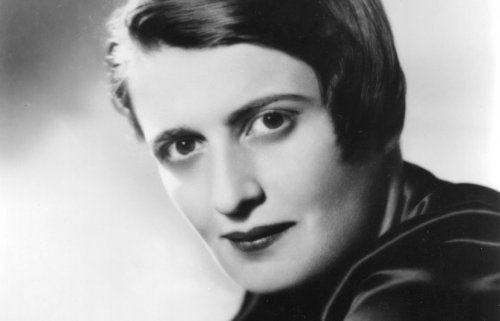 And how that scenario can teach entrepreneurs about what not to do when running a successful startup.

Ayn Rand has been dead for 35 years, but in a way she is still very much alive, as the current "It" philosopher of hard-charging entrepreneurs and hard-right political conservatives.

Ousted Uber CEO Travis Kalanick is said to be a devotee. President Trump has praised Rand as his favorite writer, and Ray Dalio, founder of the world's largest hedge fund, has commented that "her books pretty well capture the mind-set" of the president's administration. What is the mind-set to which Dalio refers? Rand herself once summed it up, telling an interviewer in a statement members of the Trump administration could admire: "Man exists for his own sake."

Rand (1905-82) was a Russian-American immigrant best known for her novels The Fountainhead and Atlas Shrugged and for her moral philosophy, Objectivism, which she described as "the morality of rational self-interest." In the latter dystopian novel, especially, she imagined a fictional "strike" by society's most productive industrialists, artists and scientists meant to show that without the efforts of its most rational and productive citizens, our economy would collapse.

Fast-forward to the current day and the tech world: Some observers have pointed out that certain members of the Silicon Valley set have made headlines for all the wrong reasons, by following an Ayn Rand-style "me-first, dog-eat-dog" path. We agree with those criticisms, but would also argue that entrepreneurs can learn a lot from the important things that Rand gets wrong.

In essence, we think of her as an anti-guru.

What Rand's ideology of self-interest missed.

Rand's bold boasts about the selfish nature of business capture the important truth that people are motivated by self-interest. But what all the executives out there today with Atlas Shrugged on their Kindles miss is that those interests are complex; and if you can't engage partners and employees as whole people, you are more likely to end up stoking a mass exodus from your company than a massive IPO.

In short, the people you work with are a lot more complex than the characters in a Rand novel and need to be managed that way. So, when you need to get people aligned behind a vision for your business, remember the following three anti-Rand truisms:

1. Everybody wants to get ahead, but everybody needs to get along, too.

Randians love her simple, straight-forward view that we are all fundamentally in it for ourselves. While there's nothing wrong with getting what you want, you usually need to work with others to get it.

Kalanick was reminded of this when Apple CEO Tim Cook dressed him down in a meeting at the computer maker's headquarters. Cook had learned that Uber was using a system that identified iPhones on which the Uber app had been deleted. Because Cook believed this violated Apple's privacy policies, he hauled Kalanick into his office and said: "So, I've heard you've been breaking some of our rules."

A chastened Kalanick knew a fight with Cook would have ruinous consequences and backed off. And he clearly showed how he'd learned a principle described by Cook's predecessor, Steve Jobs, when Jobs had to make a case for partnering with Microsoft back in 1997: "Apple lives in an ecosystem, and it needs help from other partners," the late Apple co-founder said.

So, even the notoriously aggressive Jobs was willing to work with his competitors from time to time because he understood that getting ahead often requires getting along.

2. Everybody finds great satisfaction in getting things done.

Innumerable websites quote Rand's famous phrase: "The words 'to make money' hold the essence of human morality." But it's more complicated than that: While some people are wealthy, and most less so, everybody looks for a satisfaction in working that goes far beyond wealth. As Studs Terkel put it in Working, his classic study of the stories people tell about their jobs, "Work is about a search for daily meaning as well as daily bread, for recognition as well as cash."

A well-known Silicon Valley venture capitalist once told us that most startups fail well before the money runs out. They fail when hard-working teammates no longer enjoy spending time together. Workers need to make money, but they also need to feel they are doing a good job with people they like and respect.

3. Everybody is a kaleidoscope of motivations.

Overall, what did Rand get wrong? For one thing, she ignored how people are sometimes inscrutable creatures, driven by countless contradictions and unconscious desires. There is no simple answer to the question of what makes a person tick -- no "essence."

We have heard so many executives say, "You just need to get the incentives right." And while we agree that incentives are important, they are not everything. As economists say, you get what you pay for but don't always get what you want. This is where the need for inspirational leadership and vision comes in, illuminating the need to connect with the deeper impulses that keep people surging together in support of a collective purpose.

Eddie Lampert, a hedge fund manager, learned this lesson when he tried to run businesses based on narrow Randian principles, in which general managers engaged in a brutal internal competition for resources and bonuses. Lampert's results at Sears and KMart, now teetering on the brink of bankruptcy, raise serious questions about a hyper-aggressive, do-what's-best-for-me workplace culture.

Maybe Lampert should take a tip from Kalanick and start reading more widely. Kalanick was spotted in Manhattan last week carrying a copy of the Immortal Bard's Henry V. That classic tale recounts the transformation of a shallow, self-involved playboy into a leader who knows how to motivate his people. The mature king is less like The Fountainhead's Howard Roark and more like the real-world entrepreneur Richard Branson.

An entrepreneurial leader who's anything but a me-first type, Branson has no need to impose his will on others. He inspires his people. How? Notably, he says, by giving them "a chance to give something back to the community."

The problem with Ayn Rand, then, boils down to a caricatured view of motivation. In the real world, if you want to get the most out of somebody, take the time to get to know the whole person. Slow down. Pay attention to what people tell you about their experiences at work, at home and in the community. Take a wide-angle perspective on their aspirations.

This is one of the most valuable investments you can make in your business. So, okay, go ahead and revel in Ayn Rand's inspiring celebration of individual achievement. Just remember that "to make money," you need to give people opportunities to make daily meaning as well as daily bread.